Geoffrey Evans unleashes his Word Horde at the 2018 KPC

The day of the long-awaited Kurilpa Poetry Cup opened to the sweet swell of good-times music, as our June Mystery Musician, the legendary Jeff Usher himself, cracked open the keyboards and began to play.

The Great Jeff Usher in action

Out-going President Reverend Hellfire then got the poetic ball rolling with a side-splitting attack on “the cliques & claques” that seem to infest some Poetry Groups.

The Rev confides in an audience member

Bravely stepping up to the Mic after the Reverend’s antics, was gentleman Poet Michael Vaughan, who gave us a deceptively subtle sonnet on the search for a Soothing Somnia.

(Editors note: Interesting coincidence; my research earlier that week revealed that the online “Power Thesaurus” gives us 457 soporific synonyms, which surely goes to prove something.)

Two times Kurilpa Poetry Cup Winner, Cameron Logan then launched into his campaign to become the only Triple Cup winner in the Water-Rats’ history. “All shall make Merry,” he declared, and accordingly proceeded cross-legged to unleash some witty and well-sculpted wordcraft.

Kurilpa Poets stalwart Geoffrey Evans then opened his word horde, giving a confident and bravura performance. Mixing humour with pathos, romance with clinical observation, I’ve never seen Geoffrey give a better performance and it was a shame he didn’t make it into the second round.

But competition was strong, places for the second round were few and I don’t think anyone read a dud poem that afternoon. I was certainly glad not to have to do the judging myself this year.

Veteran Poet Tom Nelson was up next and did not disappoint the crowd with an hilarious satirical poem probably entitled something like,

“State of Origin of the Species”,

where football becomes a metaphor of Evolution (or is it De-volution?) and where:

“straining men give birth to a leather ball”.

Paul Dobbyn came up next with some keen observational poetry, tinged with a hint of sepia-toned nostalgia.

Then Linda Loop was persuaded to leave the safety of the kitchen and take centre stage for a change. Though better known for her Trumpet playing, Linda has a well-trained, strong and emotive voice and gave us a powerful acapella rendition of her “Comet Poem”. “There is some hope for our dear Earth” she reassures us, voice soaring, and indeed, at that moment one can believe it just might be true.

Last but certainly not least by any stretch of the Imagination, was the strangely named “Pubert Gaylord“. (Informed sources have it that this is but a nom-de-Plume for the iconoclastic Greenslopes Poet formerly known as “Ken“.) Be that as it may, “Pubert” gave us a hearty “anti-ode” to Summer,

yearning for a place “where the Dead don’t decompose” before your eyes.

And so the first round concluded. Whilst our esteemed but still un-named Judge considered who to pass onto the second round, and Reverend Hellfire scuttled amongst the crowd collecting votes for the People’s Choice award, Blues maestro Jeff Usher once more took to the Electric Piano waiting for him in the corner. Jeff’s fingers moved with grace and precision over the keyboard, effortlessly generating music pulsing with Life-Force, manifesting in architectonic arabesques both intricate and delicate.

As usual a bounteous feast was provided at the Break through the generosity of the Kurilpa Poets & Friends, and beautifully prepared and presented thanks to the energy of Linda and her Crew of eager Kitchen Volunteers.

After the break, it was time for our Feature Poet, respected local Poet and former Speed Poets head Honcho JDUB (aka John Wainright) to “Send a crow to lay words in (our) Heads“. 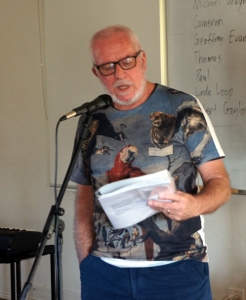 JDUB‘s humorous, insightful poems were well received by the audience. Particularly popular was his surrealistic tale called, “The Domestication of Poetry“, where he goes right into the history of Poetry from the time of Gilgamesh, when, “poets were first kept for their songs”. Now, after centuries of selective breeding, “modern poets look very different from their distant ancestors“.

And now we moved into the second round of the Competition.

The Four Finalists were called forth one by one to do battle Poetic. First up was Cam Logan, going for that poetic hat-trick with a witty new poem, A kind of Gastropod Dreaming where ancestor snails shape the landscape with their primordial slime and dream at night of unguarded cabbages.

Linda Loop seemed surprised (nay, stunned!) to be called forth as a finalist, but she rose to the occasion with another soaringly sung acapella piece, “Approaching the Zenith”. Is it really a poem if it’s sung, some pedants might whine, but Poetry & Music have been working together for thousands of years,

and I know from my own performance experience, some poems just want to be sung.

Pubert Gaylord returning to strut & fret upon the stage once more, was also fired with the urge to sing, growling & grunting a guttural gut-bucket of a ballad by the name of, “Russ Hinze Blues”.

Twas all such fun that the end of the day came too quick for me. But the moment to award the coveted Cup had arrived, and our Judge was revealed as none other than JDUB himself. But first the Rev announced that the inaugural Peoples’ Choice Award went to ..

The charming Mr Gaylord won by an overwhelming majority, though honourable mentions are due to Geoffrey Evans and Linda Loop-they both clearly had their fan clubs out.

Grinning broadly, Mr Gaylord sauntered to cheers back on stage to collect his shiny trophy (yet to be engraved-oh the engraver’s going to love this one!) and a fine bottle of Sacred Hill, the Reverend’s favourite five dollar Shiraz.

Finally, with an imaginary drum-roll on an invisible snare, a somewhat bemused looking JDUB announced his decision and then the coveted, mystically-endowed Kurilpa Poetry Cup itself was presented to none other than… 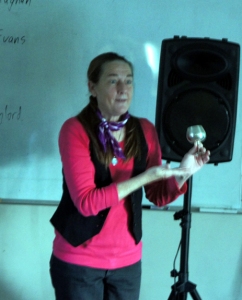 “I am truly surprised and humbled to have been awarded the Kurilpa poetry Cup”, declared a stunned Linda Loop,

as she was presented with the Cup itself and the traditional prize bundle “Loaf of Bread, Jug of Wine, and Book of Verses” (This year’s “Book of Verse” was a slim volume of verse by Ipswich poet Tom Shapcott, a fitting choice. The wine was a beautifully bottled fine Rice Wine, thoughtfully donated by JDUB).

“There were so many great poems read today”, Ms Loop opined”, myself, I voted for Pubert for the People’s Choice Award. It would have been nice though to have had a few more women get up and have a go”.

Congratulations to both Linda & Pubert, who truly deserved their prizes for their well-crafted words and professional performances.

Meanwhile the Rev did his best to make sure no-one was forgotten, and all those competing won something for their efforts. My notes disintegrate at this point but I do believe Geoffrey Evans won a potato-powered clock, whilst former two-time cup winner, Cam Logan was presented with a small jar of pickles. Paul Dobbyn seemed pleased to be awarded a charming, cat-shaped china money-box. 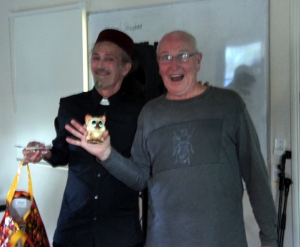 Big thanks to everyone who helped make the 2018 Kurilpa Poetry Cup a memorable day; to the brave poets who gave it their all and to the audience who stopped for a moment to listen to another’s words.

More thanks are due to those who cheerfully pitch in every month to help set up and clean up and shut-down and run the kitchen and the door and everything in-between. Your name is both Legion & Legend!

AS is those who regularly bring fine food and drinks to share and help bring our community together.

Finally, gratitude is due to all who reached into their pockets in the last month in response to our appeal. Your generous donations have allowed the Water Rats to meet all our most pressing financial commitments and continue on for yet another year. 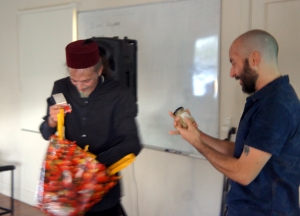 I’ll let the pictures do the rest of the talking.