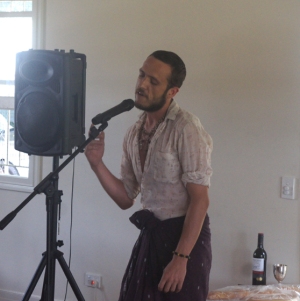 The competition was keen for the 2016 Kurilpa Poetry Cup, with the largest number of eager poets yet taking part in this august event.

won the day, and quickly demonstrated that he

understood the “Kurilpa Spirit” and was truely, “One of Us”. 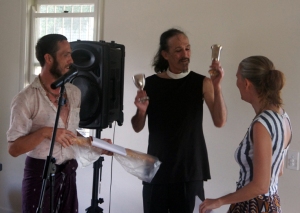 For full details of this exciting occasion

check out the following link to the photo-review.

Below the Water-Rat Gazette is proud to present Andrew’s winning poems, and an extra one thrown in as well because, as the author says, “Why the Hell not?”

Andrew goes on to further elucidate;

“It’s actually part two of Mansfield Park, about the same woman who was a neighbour of my Grandmother. Last year she and her mother were fighting over a bag of ice that Mum was trying to steal. Resulting in the daughter bashing her mums head in to the driveway

I’ve been writing a book over the past 2 years collecting stories about the forgotten lives of Australians who live with disadvantage. Should have some copies printed this year around May-June.“

Got on the piss, never miss a hit

Of my shit, had to split

Was in a fit of rage

Wasn’t even of age, the gang rape

Had to have a C Section

Lost my kid after one inspection

There’s no ascension from the pension

Constant suspension from the

Daughters that bleed, cannot read the

Fine print of the bureaucracy instated

Separated with young before discharge

If you wanna to cop a feel

That girl’s got arse hog tied

Who tha fuck does this white bitch

Think she is, this is my biz

Gee whiz I fucked her up

That day she gave me lip

Tell you what if I had a glock

Her arse would be mine, not his

The man who held my hand

Did not detest my history

I was just the income for smoke

No joke, been taking tokes

And giving strokes to blokes

In trucks, fuck you slut

You’re nothing but a northern suburbs runaway

Should have married a bush pig

And done beats in the side 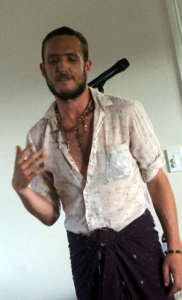 Submission for the fusion

No confusion between the lines

Of unattained love and

Have always hated the prospect

Of longevity, traded for Man smell

Molecular expulsion of my cells

Then back to the real hell

That cosmetic shell, that expels

But I ask myself why, I didn’t try

To stop applying, the protection

It’s the erection that ensnares

You know the danger of online strangers

They ain’t stayers, the layers

To get laid, constantly dismayed

By my membranes expectations

Have always put it above sensibility

The chivalry, disrupting my ability

To think clear, unable to steer

From the collision, my clouded vision

Was on a mission for fusion

The confusion, profusion of self denied worth

Unrehearsed birth of a cursed life

To ration with demons, birthed from seamen