T’was on a sunny Sunday last month that our usual band of poets, spectators and various denizens converged on the Musgrave Park Croquet Hall. As Persephone ran truant on a weirdly hot winter’s day, we assembled eagerly for this latest installment of the Kurilpa Poet’s special brand of off-key artistic devotion.

After an opening salvo of breezy, jazzy music by the Dinkum Bohos, the poets put down their scrivener’s reeds and doffed their hats to MC Cam, who called them forth to Uncle Rat’s Famous Open Mic.

Gary kicked things off for us, coming equipped with a human dais to bear his touchscreen grimoire. He spake of the nature of lies, thus providing a perfect opening to a room full of poets.

Michael Vaugn followed with a dissection of modern art, presenting items with social terms and weaving like a silkworm. He comes, bearing wandering experiments and abstractions.

Aldo practised his delivery – he thought he’d never hear it coming, not knowing he was disconnected. He assured us that, when the rocket strikes, he may be found snoring on the can.

SAV – AH – GNU! – the crowd chanted, as the man himself sung the epic of his backyard fence, and the ode of the Dividing Fences Act of 1992.

Theresa shared a memory of an old tree in the street, fighting for survival. Bitumen covering legs and toes, memories of children climbing, Theresa gave a voice to natural wonder.

The Reverend Hellfire took to the pulpit with the well-known parable, “Mr Frog’s Heavy Scene”, in which he struggles for survival against Mr Pelican, who insists his hunger isn’t born of prejudice.

Geoffrey Evans finished up our opening set, calling for a muse of fire! An evocation for her to lead us up from our dark, inky world, and possibly send us a Roosevelt or J.F.K.

After the usual bell, book and candle routine, the poets broke their afternoon fast, before dear art director Shane K enlightened us of the life and work of African American artist Jacob Lawrence.

And now, a strange hush fell over our spectators as a feature performer Vasudha Harte took to the stage.

She began with a tribute to a dear friend, colourful and rich, from the tumbled contents of a handbag. Next she took us to Paris (with an accordion) for a prostitute poem, happy, not happy, sad, not sad, in a wild piece of song and verse that, to this listener, brought to mind Schoenberg’s Pierrot Lunaire. Next, she shared poetry from the Boho Bus, and the cow’s mournful moos.

(At this point, our reporter’s field notes trail off, and are illegible, overcome with emotion. Vasudha’s work was a magical experience, and the Kurilpa Poets were blessed, doubly blessed to have her as a guest.)

And thus began our second round of open mic, hereby relayed in a rapid manner:

Gary read a poem about poetry – no popularity, it only need be, catching original moments before advising us to “Go hard, you bastards”.

Eido made a belated performance, sharing his spiritual comments on apples, poison and one-night-stands.

Paul paid tribute to the Graffiti Guerrillas of Melbourne, and the tattooed tenements.

Geoffrey rose again to ask, “What about a bit of romance? (Are we afraid?)” Smoldering looks not withstanding.

Michael Vaugn offered to us a romantic sonnet inspired by “The Tempest”, the sweet gaze of news on Friday.

Reverend Hellfire sang (as is his custom after a few reds) “The Ghosts of Dead Girlfriends”, who haunt him still.

Aldo asks if his friends are serving him well – take my sympathy (and the bus) – asking “Any more hard-luck sagas?” Hear, hear!

At this point, the afternoon drew to a close as the sun began to sink. But hark! Here’s an important Kurilpa reminder!

Our dear friend Theresa Creed will be performing at the Queensland Poetry Festival to launch her new album of poetry and music. 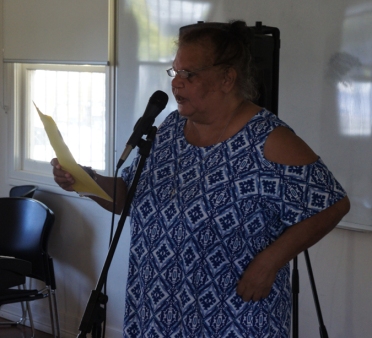 The date is SUNDAY, 26th AUGUST. The time is 2:00PM – 2:30PM. The location is the Judith Wright Centre of Contemporary Arts.

Kurilpa stalwarts are urged to come and support Theresa as she shares her words, her wisdom and her memories.

Thank you everybody, for another successful Sunday. Stay tuned. Keep watching the skies.