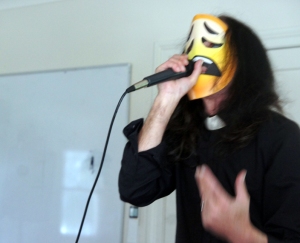 Our theme in July, Memento Mori, had several patrons turning up in mourning attire, expecting some sort of Service or Wake for a recently departed member of the tribe. Explaining how the theme was more of a generalised injunction rather than a specific instance of Mortality we swiftly moved on to the business at hand..

Fab Blues & Rock singer/songwriter and all around geetar whizz Mr Matt Barnes opened with a rousing set that would surely wake any dead within earshot.

Reverend Hellfire, keeping to the theme, read extracts thruout the afternoon, of the famously depressive Australian Poet, Barcroft Boake’s morbid masterpiece, “Where the Dead Men Lie” (Aside from this poem, Mr Boake is perhaps best known for hanging himself with a stockwhip).

Gentle-man Poet Michael Vaughan‘s first poem had plants distributing Angel Dust, while his second piece on “How to Play Pinball” had balls of steel and flipped us right out..Radio guru, Eido Boru gave us sardonic observations, sharp and brief..while Cahala‘s meandering meditations on the QLD Health Dept. detoxified the brain..Paul Dobbyn returned from retirement to share with us alliterative reflections on Dead Pop Stars, while “Aunty” Theresa Creed

Newcomer, Indigenous Poet Alan, “Stafford bred & born” told us of his 4 years of hell ending in a jail cell where he discovered he could write..SAVANU reminisced on the joy of taking a ride in the “rolls royce of Opioids” and Geoffrey Evans returned from walkabout with a digression on Astrolonomy and some “meanomorphic meanderings of the Moon”! 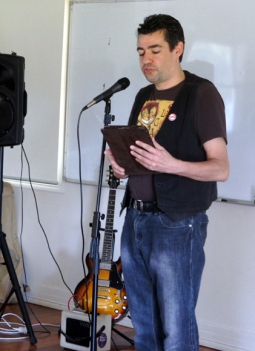 Our first Feature Poet for the day was newcomer Jamie Spence, winner of a Poetry Slam recently conducted under the auspices of the Reverend out in the wilds of Ipswich. Jamie kept the crowd well entertained with his intelligent and witty works, and introduced us to the “Poetry Game Challenge” – a technique by which several of his poems were created. The game is to take a topic you wouldn’t normally write about and do it in the style of a famous poet. His most successful piece was perhaps his Robert Frost-ian meditation on a Supermarket, which began,” Two Aisles Diverged..”

After the break and another fine set of down-home hoe-downs and more mood music from Matt Barnes, we returned for the day’s main Feature Poet, Mr Tom Nelson.

Tom is a well respected and familiar face around the Brisbane Poetry scene, and delivered a cracking feature set of poetry that showed that he’s also far too self-effacing about his talents.. On this occasion he treated us to a series of subtle and sensitive poems, (leavened with a touch of the Larrikin Streak) that result from a Lifetime’s worth of experience and observation.

A case in point, his thoughtful examination of Sexual and Emotional Fidelity: “You reach that Time when you must decide“; or his Poetic Paen to the brave Volunteer Firefighters of yester-year, in the innocent days before Occupational Health & Safety became a Thing, when,“at the Gates of Hell we stood”.

Yes, as Tom reminds us, it’s not surprising that, “There’s no old Firemen“.

Tom followed with memories of an idyllic fishing trip and a loving hymn to olfactory nostalgia,

and later a heart-felt confessional for a departed friend, “I was too busy/ I brushed you off.”

Thru-out his set his poems gave voice to a deep and sincere Humanism, ranging from the tender regret expressed

for a wounded moth ablaze,

to the bitter-sweet comic relief of “My Dad Hates Cats.“

Laugh and the world laughs with you..

Speaking for myself I think it was one of the most satisfying Feature sets that I have witnessed at Kurilpa. Well done mate, I dips me lid, as the Poet once said..

High lights of the second Open Mic included; Kitchen Martinette Linda Loop pirouetted silhouetted against the rhythmic tones generated by Mr Matt Barnes steel-string, hollow-bodied geetar, as she crooned the lyrics of her original song. (Top marks to Matt here for his ability to be suddenly presented with a sheet of music and start playing it in front of an audience.) Moved to music, the irrepressible Geoffrey Evans then gave us a spontaneous acapella “Summer-time” sans “blackface” , while the venerable Eido Boru set Johnny Rotten and the Buddha on a collision course. Cameron Logan’s strange Dream Journal took us “travelling forward in Time at the usual pace”, fuelled by cigarettes and botulism. Finally the Reverend Hellfire brought the day to a close, adopting the personae of Emoticon Man to deliver a blistering satire on modern modes of mass communication.

Well, it’s time to let the pictures do the rest of the talking, and Visual Arts Editor Shane K has once again produced some stunning character portraits. So enjoy and see you all next time!