The Ladies Step Out! 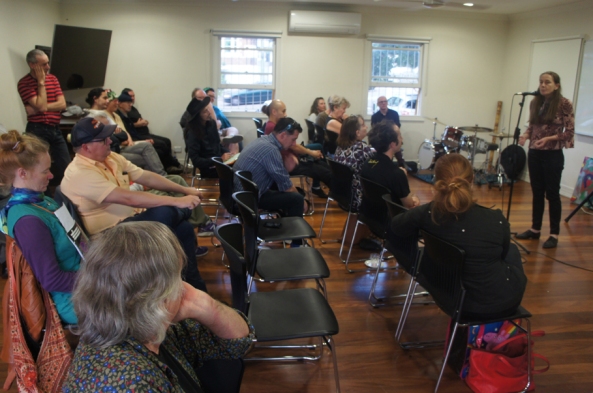 Wow! What a fabulous day at the Olde Croquet Club. Amazing poetry, an eclectic soundtrack, delicious food and, as ever at Kurilpa Poets gatherings, a friendly and diverse mix of interesting People.

MC and organising genius of the day, Fiona Privitera, 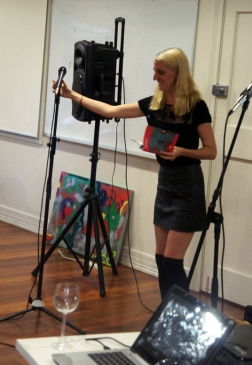 Reaching out to the Audience;, Fiona Privitera

had assembled for us an impressive array of poetic talent of the Feminine persuasion.

One such was Mystery Musician Marissa Allen, who hummed and thrummed her eldritch Violin and crooned like an ancient Sybil as the hall quickly filled with Old Friends and New Faces. 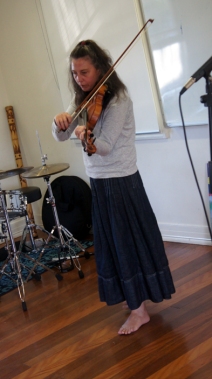 First up of the Feature Poets, Laura Kenny‘s poetry delivered intimate observations with a Wise Woman’s eye, surveying a World of meaningful minuatae, her observations ranging from homely memories of the ritual of dressing, to the sad existence of the child miners of India. 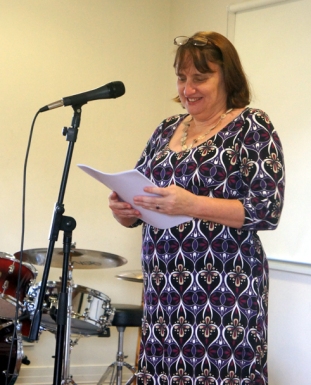 The Open Mic unleashed a diverse motley of voices of every gender for us to consider;

Kurilpa newcomer Suin Ni gave us a vision of predatory Urban Landscapes where, “Leopards are stalked by Developers” (She later told me that the “Leopards” in question could also refer to “Leopard Trees”)

Bohemian poet Bernadette le Goullon making her first appearance at Kurilpa, then told us the tale of her own ongoing battle with Developers to save some trees.

Last month’s Feature Poet Savanu warned us that “Life has become a terrible risk!” Cahala came on next to rumble and roar, followed by Sue Dreeves, a vibrant vision in purple. Alas, soft spoken Sue’s voice was drowned out somewhat by the sounds of Dischord drifting in from the “Real World” outside.

Trent then gave us an Epic nursery rhyme (I had trouble finishing it, he later confessed) with lashings of Sex.

The Rev shuffled on stage, broom in hand , to bemoan the fate of the modern “House Husband”. Cam Logan was quick and to the point. Loaded Dog growled a warning. CAVE CANEM, as the Ancients put it. Old Kurilpa-ite Rebekah Copas returned, jaunty Ibis feather in her hair, to speak of “Unseen Beings” and finish up the first open Mic.

Time for a break and whilst Marisa Allen wailed and vibrated, her nameless minion on drums rattled an ominous Thunder.

(tho I personally felt that a simpler drumkit would have worked better with Marisa’s sparse sound.) The poets & friends meanwhile feasted on the fine Spread aesthetically laid out before them by our hard-working and hygienic kitchen crew. Linda and Gil deserve a big call out here for bringing Order out of the kitchen Chaos each month.(Lord knows why, but people just love to loiter and lurk in the kitchen. In future we may have to put up a piece of string to act as an Impenetrable Barrier.)

After the break they emerged from the kitchen to demonstrate their own artistic talents. Gil brought a couple of her new paintings along to display and spoke of how her most recent work, a blood-red affair, was inspired by the recent tragic events in Manchester. Songstress Linda Loop later demonstrated her vocal prowess during the Open Mic 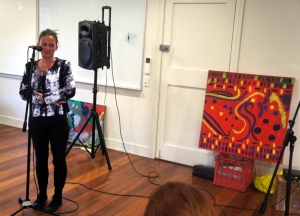 Gil brings out her Art vision

by delivering a cascading, note-perfect rendition of the Schubert Lied “To Art” (An die Musik) in faultless German.

Visual Art Supremo and Candid photographer Shane K gave an informative talk on Australian “Modernist”, Margaret Preston, whose paintings and prints had been playing over the Virtual Gallery. I was interested to learn that apparently her husband was one of those rare paragons who gave unwavering support to their partners Artistic aspirations. Should be more of it. 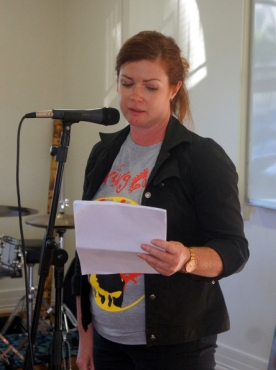 Vanessa Page‘s Feature Set. Sorry. (Better than last month though, when I lost ALL my notes. This month I only lost one page. Damn it, it was here this morning!)

But I do recall it was a bloody good set, professionally and passionately delivered, that had the audience’s attention riveted throughout, despite the sounds of Dischord once again drifting in from the Hostile Outside World. If you get the chance to see Vanessa Page live, you won’t be disappointed. 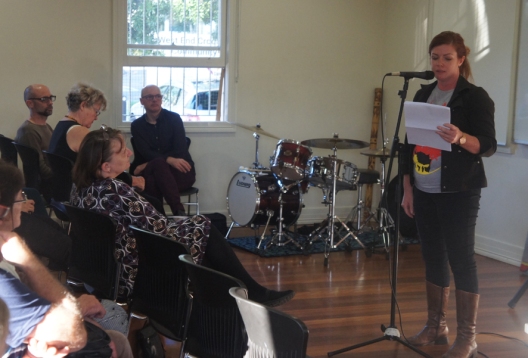 Marisa Allen demonstrating her versatility, then did a set of her poems sans violin. (notes! notes!)

Finally the second Open Mic session arrives, somewhere in the middle of which my notes resume..

The REV made a call for “More Beautiful Men and more Powerful Women“, whilst Bernadette returned to explain how her glasses were provided by the Government noting; “that’s how they Control what you see!” After 29 years off alcohol, Savanu gave us a poem about “Harold who hates cats”. Cahala assured us we are “all Masterpieces of Art”, though in my case possibly a “flawed masterpiece”, which is surely better than no masterpiece at all I suppose. Trent gave us an Australian Haiku,

“Bus stop Dreaming”, to which Cam Logan touche’ed with an absurdist “Parsley Haiku”. 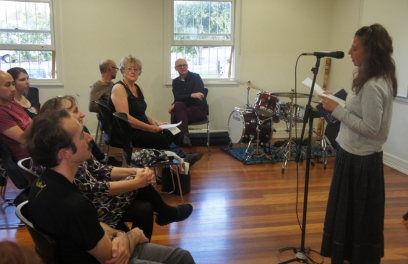 Finally Shane moved a vote of thanks to our stylish and talented MC, Fi Privetera, to which the audience responded with enthusiastic applause.

All in all a very successful day, here’s hoping we have many more.

As always I’ll let the pictures tell the rest of the story, but before I do, let me move my own Vote of Thanks to our ever ebullient Art Director, Shane K, who each month takes the time and effort to document our events and produce the fine photographs that appear on this site.

(Historical footnote; When Shane took on the job I told him, “Make us look interesting and attractive!”, and God Bless him, he’s done the best he can with the material he’s got to work with.!) 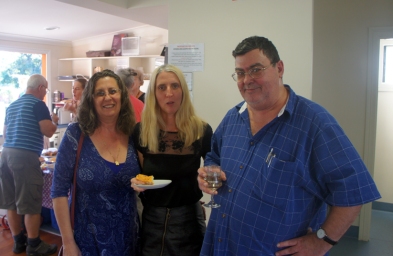